In the first six months, staff turnover dropped from 200% to 15%, absence rates declined 80%, and sales recovered from a shortfall against budget to 12% growth!

This client is a well established High Street Retailer who has more than 100 stores spread across the UK and Europe. Employing over 2,000 staff across many different cultures and economies, the modern challenges of recruitment costs, staff retention and motivation, and customer service have never been so pivotal in defining a business’ success or failure. This company launched several new Concept Stores in 2001 and simultaneously set out (for the first time) to define: • The detailed standards required for the physical and ergonomic functions of the store. • People Management initiatives – i.e. how they could recruit, train, motivate and retain the best staff for maximum productivity.

The Challenge:
One store was chosen to become the live project base in which the new People Management initiatives could be developed. This store had a history of low staff morale, very high labor turnover in staff and management, very high absence rates and a very poor customer service record. It also suffered from poor visual merchandise standards, and sales had fallen below expectation. All in all, the store’s profit base was under severe pressure.

As a result, several cost cutting measures had been taken. These included reducing overall payroll and overtime, increasing trading hours, turning off heating and lighting in back-of-store areas, closure of the staff-room, and suspension of the provision of free hot drinks. In addition there had been no Store Manager for some time and several other key management vacancies had also not been filled. As a result there was no clear direction for the team. In-store communications, working rotations and holiday schedules were disorganized, and sales staff vacancies remained un-recruited. Sickness and absenteeism was running at more than 50 days lost per month.

This presented a clear and perfect opportunity to demonstrate that quality people management could make the difference. The Concept Store General Manager worked together with the HR team with two clear goals in mind;

The Process:
As qualified analysts of the behavioral assessment tool, Predictive Index (PI), the GM and HR team were aware that the fastest and most accurate way of getting to know the team, their motivational needs, energy levels and morale was to have all employees complete a PI. When this was completed, they discovered that there was a significant common trend – 95% of the team suffered from low morale! The results of their PI workforce assessments were shared with each team member individually and during this process they were asked for examples and reasons for their low morale. It quickly became apparent that simple cost saving exercises had conspired to have a dramatic affect on the team and as a result some basic motivation needs were not being met.

Key Actions:
Address the low morale. The first key action to take was simply to reinstate the heating, lighting and free hot drinks. Immediately a more optimistic feeling spread thorough out the store. It was also noted that as a result of completing their PI and receiving their feedback, the team had an immediate feeling that someone cared – someone in the business had finally taken time to understand each person. Put the right person in the right job. The next key action was to compare the effective utilization of each person’s motivation needs against the behavioral demands of their job. Again it quickly became apparent that many simple, cost free adjustments could be made to ensure that each person had a role that was more suited to them.

For example the sales process was two fold. First, there was the face to face selling process – essentially behavioral demands more closely suited to more extrovert people. Second, there was the computer based order process – a complex and detailed task requiring attention to getting things done accurately, repetitively. The answer was simple – impatient, extroverted staff would be allowed to focus on the face to face part of the process – capitalizing on their need for involvement with people and a variety of quick, less detailed tasks. An immediate result was that service in the store improved – sales staff began to smile, to enjoy talking and selling. Invariably customers began to comment in the positive. They noticed! Staff that had a greater need for stability, repetition and a need to conform to processes and rules were allowed to focus on the order processing (data entry) part of the process. It meant that sales staff would be handing the customer over to order processors and by that stage customers were invariably ready to sit down and finalize the details of their purchase, having established their exact needs with the sales person. A key result was that customer complaints were halved within two months! The reason was simple – orders being processed were now accurate and simple; costly and annoying mistakes were being avoided. Recognize achievement appropriately. Next, simple graphs were created to compare each other’s performance; to create open competition amongst the sales staff who were more assertive and individualistic and who enjoyed the “buzz.” Individual (private) graphs were developed to monitor the accuracy and quality of work completed by the more passive, risk adverse order processors who set out to avoid error by taking time to do things to a very high standard.

The visual appearance of the store also began to improve. As the sales team became more focused and competitive, they realized the benefit of improving visual and commercial standards themselves. The store came to life. Focus recruitment efforts. Turning their attention to recruitment, The PI Job Assessment – the PI tool that profiles the job –  was used to identify the behavioral demands of the outstanding current management vacancies. They identified that instead of recruiting team managers, they needed to recruit SALES managers – more assertive, individualistic and driven people with a will and a desire for results, goals and status, and who relished variety, pace and flexibility. Using The PI Job Assessment, a job advertisement to attract sales managers was drafted. The words used in it more effectively attracted the type of person they were looking for and instead of the normal hundreds of applications they would have received for such a role, this time they received only 20. From these, 10 people were short-listed and assessed. As a result 6 job offers could have been made. So not only had this simple process worked but it also significantly reduced time spent sorting, checking, interviewing and selecting candidates.

The Results:
In the first 6 months, staff turnover had dropped from 200% in the previous 6 months to 15%. Absentee rates had also plummeted from an average total of around 50 days per month lost to just 10. Sales increased rapidly – from a significant shortfall against budget previously, to a 12% growth over 6 months. None of the existing team lost their job as a result of the role changes made. The difference was a subtle shaping of roles (without spending money) to ensure that each person more closely matched the behavioral demands of the job. Measures were also adapted to more accurately reflect the general profiles of groups of people – i.e. private recognition for the more introverted staff, and public recognition for the more assertive, competitive members. This client demonstrated that by having a greater understanding of individual motivation needs, it was possible to significantly turn around a poorly performing team without staff looses or major cost in an incredibly short period of time.

PI® is a global management consulting organization that helps companies be more successful by focusing on their most important asset-their people.
Praendex Incorporated, the parent company of PI, is publisher of the Predictive Index®, the Selling Skills Assessment Tool™ and Customer-Focused Selling™. © 1998, Praendex Inc., doing business as PI. All rights reserved.
This PI® case study is presented to you in partnership with a global PI Member Firm organization.
Predictive Results
904-269-2299 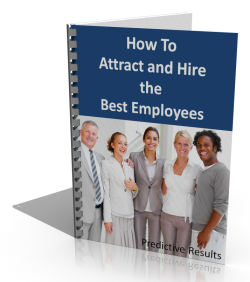